Red Meat linked to Cancer But What Does It Really Mean?

Red Meat linked to Cancer But What Does It Really Mean? 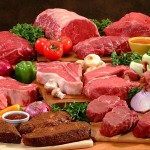 A new study from the Harvard School of Public Health has found that consumption of red meat has an association with the increased risk of cardiovascular and cancer mortality.

However we need to look at lot closer to work out what these results really mean and in fact does consuming red meat really cause cancer? (Make sure you read the entire article so you can make an informed decision on what this study really means)

Researchers observed and followed from 2 separate studies 37,698 men for up to 22 years and 83,644 women for up to 28 years who were free from cancer and cardiovascular disease at baseline. Diets we monitored and assessed through questionnaires every 4 years.

Researchers estimated that 9.3% of deaths in men and 7.6% in women could have been prevented at the end of the follow-up if all the participants had consumed less than 0.5 servings per day of red meat.

The study also found that by replacing red meat with other healthy protein sources, such as fish, poultry, nuts, and legumes, was associated with a lower risk of mortality (1).

What does this mean?

I think this study is correct and accurate in its findings that consuming too much red meat has a direct link to cancer as well as not having a balanced diet full of different sources of protein and plant food.

However I think it is important to ask what type of red meat was the study based on?

I think you will find the majority of people were consuming grain feed meat which is less expensive and usually filled with antibiotics and other chemicals as appose to it’s healthier alternative grass feed meat.

Grass fed meat in comparison is much more superior to grain fed and contains the following:

1) It has twice the amount of Beta-Carotene (a precursor of Vitamin A) – needed for normal vision, bone growth, reproduction and cell division.

2) It has 2.5 times the amount of Vitamin E, a natural antioxidant which can help mop up free radicals.

4) Grass fed beef has increased levels of conjugated linoleic acid (CLA), an important polyunsaturated fatty acid which is involved in reducing heart disease, cancer, diabetes and the accumulation of our own body fat.

These differences in grass fed vs. grain fed do not only come up in beef but it also evident in lamb and milk products from grass fed sheep and cattle (2).

It is hard to argue against that there is a very real relationship between high consumptions of red meat especially processed meats and cancer (20% increase).

However it should be noted that by eating meat that is grass fed instead of grain fed seems to show a lot more health benefits that actually help fight against cancer and other diseases while providing you with a lot of needed nutrients. This includes double the amount of beta-carotene, increase omega 3 ratio’s (58% more), increased levels of CLA (59% more) and lower amounts of saturated fat.

So make sure the next time you do your shopping and buy your meat that you find out if it is grass fed. This may not be easy at the supermarkets as most meats are not clearly labeled but you will find that most local farmer’s markets will be able to give you what you are looking for.