Spice up your life with Cinnamon!

Spice up your life with Cinnamon! 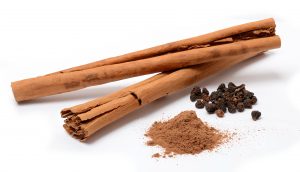 Cinnamon is an ancient spice that have been used medicinally in Chinese medicine for numerous years, however in recent years western society have found research on the benefits of this spice, especially in regards to cardiovascular health and helping control the blood sugar levels in type II diabetes mellitus.

Both cardiovascular and type II diabetes mellitus are multifactorial, diet defines both of these disease and a change of diet can be shown to help reduce the risk or severity of these diseases.

To receive the beneficial effects of cinnamon, have 1 gram to 6 grams per day to enhance its therapeutic benefits.

For people who do not suffer from type II diabetes mellitus or cardiovascular disease, increasing cinnamon into your diet will help to control your blood sugar levels and blood lipid levels.

Cinnamon can be increased in the diet by simply adding it to yoghurt, sprinkling it on porridge, have it on toast or adding it to cooking.